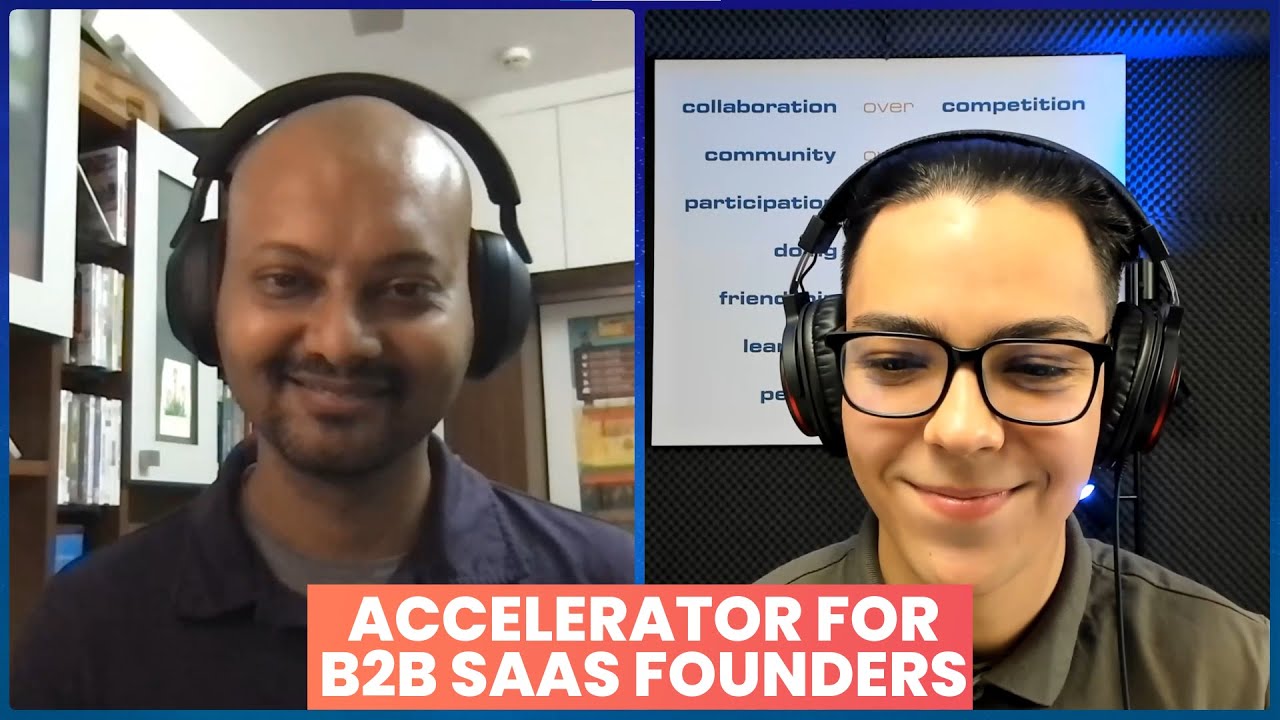 Prasanna: Upekkha is an accelerator for B2B SaaS startups. We help folks trying to build global B2B SaaS companies grow faster. But, again, focused only on B2B SaaS, we take people who have revenue, so that could be as little as one to five customers if it’s mid-market or enterprise, or it could be, you know, few thousand dollars if it’s an SMB.

We have startups that are where the founders are all over the world. There are founders in the US, some in the Middle East, and some in India. The companies are typically headquartered in the US with subsidiaries in different countries. Many backend teams are in the frontend teams of the startups supporting these businesses.

How do you view SaaS in India in the upcoming years?

How long is the Upekkha program?

Prasanna: The program is six months. That’s the core part of the program. Then we have an add-on part of the program. We continue working with them for another six months, and they have lifelong access to the community. So it basically changes from a push model to a pull model. The first six months are very structured. There’s a lot of content and coaching, which is calendar scheduled. Then the next six months is more event we have ways of meeting founders. Around 15 to 20 startups are in a batch, and we are doing 3 batches in 2023.

Why should startups join Upekkha?

Prasanna: From a track record perspective, out of the first 10 startups we took in the first two cohorts, we have seven startups that have crossed $1,000,000 in ARR. Out of that seven, we have three startups that have crossed $5,000,000 in ARR. So I think we have 2 startups that exist and 1 startup that’s still figuring out where they are. The interesting thing is that most of these startups they’ve raised very little capital. Founders own 70-80 % of these companies’ equity, and typically, the rest are employees. And in many of these startups, we are the only outside shareholders.

For example, one of the founders that spoke to us in the second cohort, his first $1,000,000 ARR took him nine years, his second million dollars after working with us, took him nine months, and his third million is now taking seven months. And he has not raised any capital beyond friends and family, which he did very early on. So that’s the kind of outcome that founders in our have. There’s another startup in a more recent cohort. I thought two years ago, the cohort they were struggling to build revenue for a long. And since November 2021 until now, they’ve gone from nearly zero to almost $800,000 in revenue.

What is the fee for Upekkha?

Prasanna: We take equity, 4% equity, for the program. We also have $100,00 that we can invest. So if they want to take those a hundred thousand dollars, that’ll be a convertible note.

What lessons are you teaching to SaaS founders?

Prasanna: We want founders to believe that building a startup is not an art but a craft. There is engineering you can actually do in a series of steps. Especially in B2b, if founders think – hey, my business is special, my business is different from everything else, and that will not work. Because in B2B, your buyer is sophisticated. They understand what they want, so their buying behavior is pretty predictable. And if you are doing stuff that matches their buying behavior, you can sell successfully. If you don’t, then it’s not going.

Since we are working primarily with B2B SaaS startups, we tell them you must have a flywheel for their business. And in B2B SaaS, what does that mean? That means that you should be able to attract customers. You should be able to engage. You should be able to sell them at a low cost, they should be able to pay you more over time. And those same customers should get you referrals, so your acquisition cost reduces over time. So, you can build a very capital-efficient business with all of these pieces. And if you build a capital-efficient business, then as this flywheel gets going, just like in the example I shared earlier, founders find out that they can get revenue growth faster and faster as they grow bigger and bigger.

Unfortunately, what a lot of founders do is they miss one of these pieces, and then when they start building that, they realize that one of these pieces is very inefficient, and after you build it to a certain scale, it’s very hard to change. So by design, you know growth is much better if you have everything in place and turn the switch on.

How do you find mentors?

We have a very strong community, so the previous cohort founders are helping the current cohort. We feel and believe that that’s the only way this mentoring can work. Because when you have external founders, it’s great because they may have a much wider experience, but if they’re too far ahead of you, they’re unable to help you take that next small step you need. We help you find help from someone at each step.

That’s the community we’ve built, and that’s how we enable our current founders to get help from the previous cohort founders. They will be able to say – look, when you’re doing this, this is what we did, and this is how it worked out for us, or it didn’t work out for us, and this is what you should do. That’s much more relatable versus when we have external. We generally use external mentors for things that are very, very strategic. So for making connections for introductions and reaching out to broader communities. Those are the places where we have a lot of external mentors who can help.

The importance of community

Prasanna: Our community mostly uses Slack and WhatsApp, but we also do social meetups. We had one in Chennai, and we do it in different cities in India and the US, the most recent one being in San Francisco. We keep doing that in different places just so that founder can get together and meet each other. So in the six months, we expect to meet three to four times. Again, when we meet, there is no content. We are just getting people to meet. Last week e did a meetup in Chennai. We had a founder. We had three different founders who had just exited their SaaS businesses. It was a closed-door session. They were sharing all the lessons they won’t share on stage. These folks were building relationships.

How can investors join Upekkha?

Prasanna: Investors can invest in our fund, and when they invest in our fund, if any of our startups are raising subsequent rounds or in that same round, sometimes if they have space, then we open it up to investors who want to. So that is our Upekkha fund, and it’s currently online, and people can subscribe to it.

How do you find your startups for the accelerator?

How big is the Upekkha team?

Prasanna: We are about 35 people right now. Some people are working in the fund. Then we have an ops team, which works with each cohort. Since we’re running like three cohorts of startups a year, we have an ops team that runs for each because there’s an admissions process. So an admissions team is working with each of these startups. And we also do quite a bit of support for these, for startups. So we have all the perks that we have, and we also have a job board for all our startups put together. There are about 120 jobs on that right now. So all of this stuff requires a fair bit of backend.

What is your story, Prasanna?

Prasanna: I did my master’s degree in the US, returned to India, joined a startup, and joined another startup for about five and a half years. Then I did one more startup. And the second startup that I did, if I had known about SaaS, I would’ve called it SaaS at that time, in 2010. Then I joined Amazon as a product manager in the advertising team. I did that for about a year and then joined the Microsoft Accelerator working with startups on product and growth.

What is the biggest mistake that SaaS founders make nowadays?

Prasanna: I will restrict myself to B2B SaaS, many founders running B2B businesses, the number one mistake they make is solving a problem that doesn’t matter to the customer. Most of the folks who come into B2B have previous experience, but they pick a problem that doesn’t matter as much to the customer. And that might be from their background, or they might have come to some process to pick that.

An example I can share is that one of the founders was building accounting software. I told these founders – look, you can’t solve everything in accounting as a startup and expect your customer to buy that from you. And so they narrowed it down, and now they’re solving a problem where it seems very trivial. In the last 12 months, they’ve gone from zero to $800,000 in revenue. And when they first saw it, they thought it was a very trivial problem, but now they realize it’s very big.

And more than that, it has immediate value, a very high value to the customer. And the customer can see that value very quickly. And that’s why when we talk about the flywheel, you have to be able to sell it at a low cost. If you want to sell something cheaply, the customer must see value quickly. If it takes 12 months for the customer to see the value, then you know it will not sell quickly. That’s the number one mistake we see founders make – pick a problem to solve. It might be a real problem for the customers, but it’s not an important enough problem. It’s not an urgent problem.

What’s one piece of advice that you’d have for them?

Prasanna: I think the number one thing that founders should do is talk to many customers. And when you talk to customers, you are to talk to them in a way where you’re not selling, and that’s very hard for founders. You have to be able to discover what that customer’s problems are. I think there’s a nice book called The Mom’s Test. I recommend that all early-stage founders read that and figure out how to have conversations where you only speak 30% of the time. Make sure that the other person is talking to you a lot and also helping you understand their life. And if you do 300 of those conversations, you’ll be able to build the product.