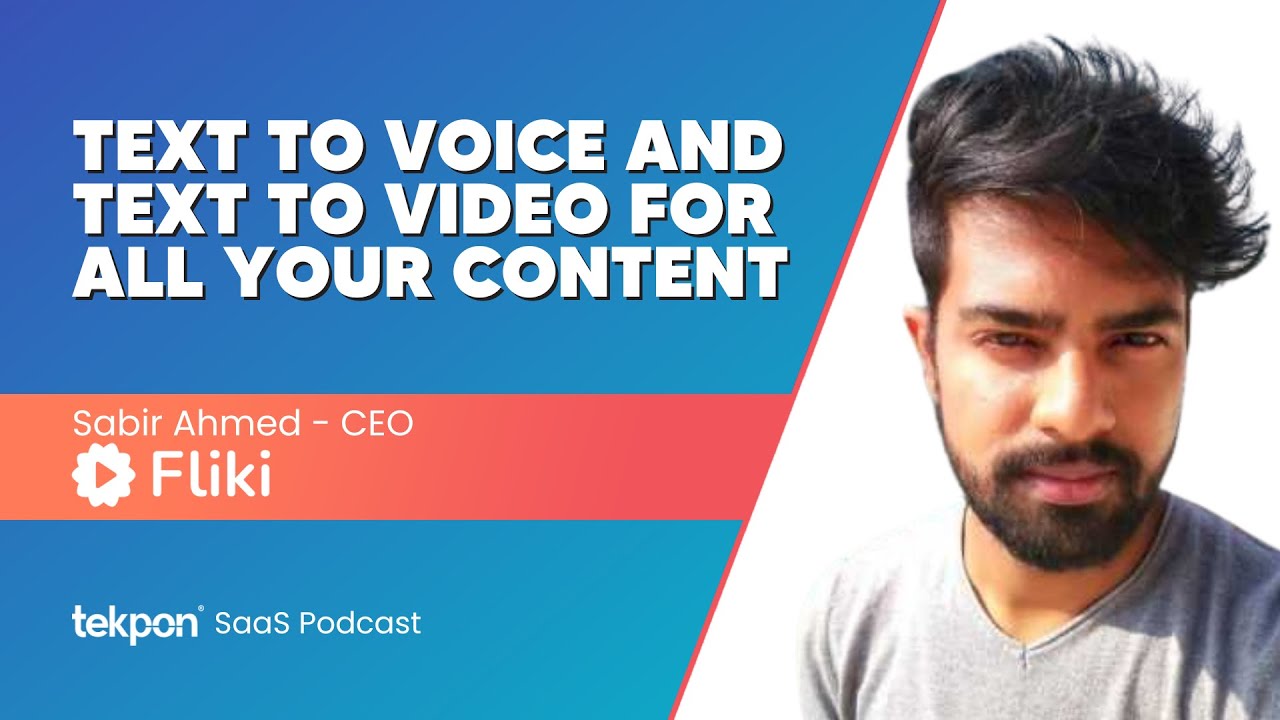 How is Fliki helping people?

Sabir: Fliki started with a text-to-speech solution, but we are slowly moving into text-to-video solutions. So what we are trying to do is basically help content creators create and repurpose their existing content. So something like if people have a blog or any kind of text-based article, they can convert it into a video with the AI voiceovers and a lot of stock images and small clips. So ultimately, giving them a beautiful video without having to deal with many crazy video editors. We are doing text-to-video now. We’ve already moved. We’re just perfecting it as we speak, and people can try it out. Yeah, definitely. People can head over to Fliki with a free sign-up, and they can start testing out the product and playing around with it.

What are the top three features that your customers love?

Sabir: One is the amount of AI voices we have. We have more than 750 AI voices in over 100 different languages in dialects. So people can easily choose between their regional languages. And all of these AI voices are not like the traditional robotic voices you’re used to. So there are many really good voices, and that’s one of our top features. Okay. The second best feature is the whole text-to-video feature. People can just add that text up and select from our inbuilt stock library of over 5 million images and royalty feed images and clips. So they can easily stitch together and just hit render, and the video comes out live. So people really love that. The other thing that not many AI voiceovers or voice creators do is give them the option to emphasize, correct the pitch and change the rate. And we also give them some of these voices. Also, we support something called voice style. So you can actually select it if they want the voice to sound angry, excited, or sad. So there are multiple styles like this, so you can definitely select them, and they will be showcased.

Sabir: We are mostly targeting bloggers with actual text-based content blocks already generated, so they can just put in their URL and the whole what Fliky does, it uses AI to summarize this particular blog and put it in smaller chunks and create a video out of it. So that’s one of the first use cases. Basically, convert your blogs into videos so that you can share them on social media and get more traffic back to your blog. So that’s one way of just one of the major ways. One major thing is just about embedding your audio version of your article, your blog post, and putting it back into your article so you can just embed it as an audio player. So we provide an Iframe widget so you can copy and paste that code, automatically converting the entire page into audio format. So people can just listen to it.

You feature comparisons with your competition directly on your website. How has that worked out for you?

Sabir: We love competition and want to ensure we get inspired by our competitors. Whenever we see a cool feature from our competitor, we would appreciate that. And we think about so ultimately, at the end of the day, we have to realize we’re doing this for our users. So it’s about a good win. So eventually, we try to stay as tense as possible. So users will recommend many features to us, and we will put them on our roadmap. We easily tell them what we’ve done and what we’re doing. So we have a very public open roadmap. People can check it out; this way, they can see what we’ve been working on and what has been delivered. And so it’s very clear. And when they say, okay, how do you compare to this particular tool?

Instead of just us trying to murky the whole thing, we try to easily put a clear table, side by side comparison of us versus our competitors to make that. And what is the pricing for your product? So Fliki is free forever, but it has limited credits. So it’s like 500 credits, just basically the number of words they can convert into audio or video. So that’s limited. But if they want to increase that particular credit, we have plans starting from $29, which gives them up to 10,000 words per month, so they can easily convert it into all your video. So that’s 1 hour of video creation per month, which we think is a very good amount.

When did you start Fliki?

Sabir: The product was released last year, December, towards the end of the year. That was a soft launch. Basically, it was just amongst friends. But the actual momentum we got is in the past three to four months. So we’ve been getting a good amount of feedback and a good amount of sign-ups every day. And based on that, we’re trying to convert. As I mentioned initially, we started with text-to-speech because we realized that many tools out there were still incapable of doing some really good things. They were good, but they were not good enough. So we thought there was a huge market out here, and the other opportunity was that the AI voice was getting good over time. The voices will be so good that people can’t make out the difference between is it a voice or are they real voices people can’t make up. So we are betting big on that. So we want to make sure we are ready for that.

What was your biggest challenge in the company?

Sabir: Every day, we have a new challenge, but for right now. We give a lot of importance to UX. We want to ensure every new user who has never used any tool to create videos can jump in from day one within a couple of minutes without an onboarding video. They can start creating tools. Creating a video. So that was one of the hardest challenges, basically making it simple but at the same time powerful enough so that all the use cases can be attempted. So that was the biggest challenge.

How big is your team?

Sabir: We have a team of four. So we’re two co-founders, and we got two other people helping us with marketing and content. My co-founder and I have been creating products for over five or six years. So my co-founder has experience of over 10 years. I have experience of seven or eight years. We both come from tech backgrounds. That means we’ve been coding pretty much most of our lives. So we’ve been creating products long before. So it’s nothing new for us, though.

We use a lot of Notion, so we love Notion and other products that your company uses internally. We use Figma, too, for designing, we really like Figma. Sabir: For everyone listening to this, we have a special discount code”FLIKIFORYOU10″, which you can use now.