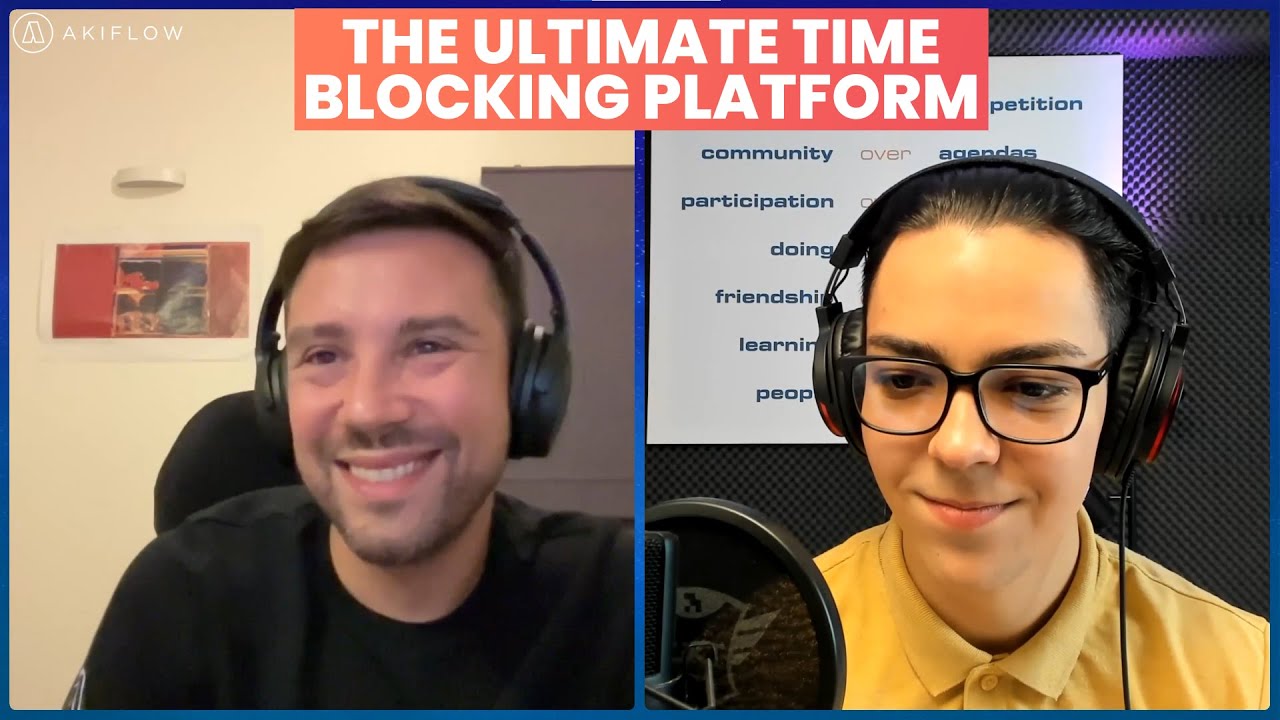 Nunzio: Akiflow is a task and calendar manager app that unifies tasks and calendars into a single interface. We have a universal inbox, meaning all your tasks from different platforms can be imported automatically into the single inbox in Akiflow. You can also turn emails and SSlack into tasks, so Akiflow becomes a source of fruit for everything you want to turn into project management.

We believe there’s enough in the market for project management but what is missing right now is a tool for individuals to organize their own time. The problem is that a company often has multiple project management platforms. Calendar events, and people, have their tasks, and tasks arise on Slack, in emails, and during video conferences. There is a need for a tool that helps people organize themselves, consolidating and collecting tasks from all over the workspace.

If we can put everything in one place by getting all the tasks you have in other platforms, I’m making you save a lot of time because you don’t have to do it manually anyway. If you want to organize yourself, you need to have a clear list of what you will do today. Right now, the list is in a project management tool and the calendar, and then you receive emails, and then you have Slack messages, but with Akiflow, you save all the time it takes to consolidate all the information into one app.

What are the best Akiflow features?

Nunzio: The universal inbox is definitely what people like the most, together with the calendar integration. We have a fully functional calendar that is integrated with Google Calendar. You can drag and drop tasks into the calendar, do what’s called time blocking, and create a visual plan inside your calendar on what your week or days will look like. With Akiflow, it’s straightforward because it’s not creating an event into the calendar. We are making you play with tasks inside the calendar, which best represents your tasks.

We only integrate with Google Calendar now, and we don’t offer our calendar, so it makes no sense. Everybody has either Outlook or Google. We will integrate Outlook in the next few months, so we plan to combine it with as many platforms and tools as possible. As I said, we don’t want to substitute anything in your workspace, and we just want to help you have everything in a single place to be more productive.

What is the pricing for Akiflow?

Nunzio: We charge $15 per month, and there’s a bit of a discount if you pay yearly. Most of our customers decided that the yearly plan was the best option. And we’ll probably change our pricing in the future because we’re adding many new cool features in the next few months that will help people be even more productive.

Nunzio: There are a lot of other applications in the space, and to be honest, we don’t look at our competitors as a problem. All of us platforms in the space approached the productivity problem from a slightly different angle. Some apps are more focused on tasks, and apps are more concentrated on calendars. We’re a bit in the middle, but many apps focus on integrations, automation, or AI that automatically organizes your time. There are a lot of players, but the space is still so empty, and no one is a winner.

I don’t believe there will be one because we all chose a specific approach to make people faster to solve productivity problems more quickly. It’s great that the space is getting very crowded, and we weren’t even the first to move. There have been like apps for decades right now. But I feel like the approach that we have is, is an approach that works well considering the teams in 2022 and the future because of how we look at the workspace and how the workspace is.

When did you start Akiflow?

Nunzio: We started in 2020 and went through YCombinator in the summer of 2020. It was a little bit of a different product. We were building something different, and we launched the current version of Akiflow in June last year. It’s less than two years. We have this product out, and it’s going pretty well. We keep growing, we have a lot of customers, and we keep improving the product. We release a new update almost every month. We just released an update today. It’s going live in a few minutes. We’ll keep working on new integrations. We talk a lot with our customers, so we know what they want and how to make the product better. It’s just a matter of time, and we also grew as a team, so we’re going to be faster in building the product in the next few months.

Nunzio: I’d say we changed the idea altogether. We were building a product it was a standard line interface to control lineups. I could create an event on Google Calendar, a task on Akiflow, or a card on trial, just from an interface similar to Spotlight. We had no calendars, and there wasn’t a task management system, but we noticed that there wasn’t an opportunity for us in that specific direction, but we noticed that people were using that software. Because there wasn’t a SaaS like the current version of Akiflow in the market, many used it to move tasks into their calendars or information from one place to another. After talking to many of them hundreds of users, we decided that there was a better opportunity to build a different kind of productivity app.

Nunzio: We are a little bit more than ten people. Most of them are software developers. We hired a few people to build the mobile apps, launching the web version soon. We have a lot to make still.

What is your story, Nunzio?

Nunzio: I started as a software developer and then worked for a startup for a few years. And then, with my co-founder, Sebastiano, and another co-founder, we decided to come to India and set up a software development company. We then worked as an agency in Italy and India for eight years. We were building great products and startups. We’re doing a lot of marketing activities, and then we decided we wanted to do something more scalable that we were passionate about. We left the agency and started to build Akiflow.

Would you recommend the Y Combinator to other founders?

Nunzio: Definitely, definitely. That was a life-changing experience and definitely the most valuable three months of the past several years.

What was your biggest challenge in founding Akiflow?

Nunzio: We were facing challenges constantly. As a founder, and especially because I’ve been an entrepreneur before, the most challenging thing was probably changing my perspective on where to look for success. When you’re building a standard company, every step that you take is kind of a normal step. You can measure growth by, you know, you can see every day that you’re going ahead with a startup. You have to be used to measure the number of things that you manage to get done. And knowing that most of them are going to be in the wrong direction or they won’t have the same impact, but eventually, you’re going to make it. It’s a marathon. You have to change the mentality from a sprint to a marathon where many things will not work, but it doesn’t matter because if you keep pushing, eventually, it will work.

Nunzio: I really like Slack. Yeah. We use it extensively in the company for a lot of things. Most of our work happens on Slack, and we get information from outside of the company into Slack. We interact with our customers, talk about features, brainstorm, and do most of our work in Slack. I think that’s my favorite tool, other than Akiflow.

Being an angel investor

Nunzio: It’s an entertaining activity, to be honest because you get to have a chat and keep meeting people who are building great stuff. You keep learning. I learned a lot about new businesses and things I would’ve never thought about. And I get to meet amazing founders. The most important thing I learned is that it is just about the team. If the team is good and then there’s a chance. Otherwise, everything else doesn’t matter.