PayKickStart is a very competitive software product, well thought and with clear gaps to fill in the automation market. There are more than a few products in the marketing spectrum that they could call competitors.

However, they somehow managed to keep on track, focus on their own product, and make it great. Now, let take a look at some of the most remarkable ones:

To get the best out of it, we’ll be comparing features and value for money.

Even at first glance, it’s evident that these two magnificent software products share the same focus and most features—however, each in its manner. Furthermore, while there has been a time when ThriveCart was offering a wider variety of payment gateways, that ship has sailed. PayKickStart is on the verge of launching an Apple Pay and GPay payment gateway as well. Now, while we can find the competition between the two somewhat obvious, we have to applaud ThriveCart for being a step ahead on this one. I guess we could also say that ThriveCart was more entwined toward the UX side of things earlier. However, suppose there were several differences between the two in terms of features in the last couple of years. In that case, we can now say with certainty that they are almost gone, with a few exceptions in the integration side where ThriveCart came better prepared. Sorry, PayKickStart, but I guess we will have to give this one to ThriveCart.

Now, here is where it all becomes interesting. Both PayKickStart and ThriveCart have two very distinctive pricing strategies. Meaning that on the one hand, ThriveCart comes with a one-time fee offer of $495 for the standard package with the option to get the Pro at the additional charge of $195, resulting in a total of $690 lifetime. On the other, PayKickStart offers a subscription package of up to $299 paid a month or a 20% discount if you pay yearly.

Well, this is a hard one to settle, folks, as the two of them come with such similar features. The only thing we can really point out between the PayKickStart and ThriveCart is the value for money aspect, where we couldn’t help but declare ThriveCart the winner in this battle.

Both PaykickStrat and UltraCart are amazing tools. However, in contracts to PayKickStart vs. ThriveCart, the verdict and the better value for money proposition come from PayKickStart. Now, let’s get into why that is.

PaykickStart comes with a larger portfolio available in terms of features and integrations than UltraCart. Moreover, UltraCart is available only in English, while PayKickStart offers 24 other languages.

While a while ago, PayKickStarter used to do better in price terms than UltraCart, that isn’t the case any longer. UltraCart offers half the price of PayKickStart on its small package and $70 less for 250k packages. However, UltraCart doesn’t offer a Custom package and neither the designated account manager to run your campaigns. Thus, from this perspective, we could say that PayKickStart brings more value for money than its alternative.

The PayKickStarter alternative offers less value for money than it does strictly and objectively, logging at the extra premium features it offers despite the higher price. We would say that it’s worth spending the extra buck for the extra integrations, languages, features, and designated managers in this context.

These products, while that first glance, seems to intertwine, they are different in focus. In terms of PayKickStart vs. ClickFunnels, we can only speak of PayKickStart instead of ClickFunnels and not the other way around. If you are wondering why, well, let’s see.

What is the difference between Clickfunnels and PayKickStart?

ClickFunnels focuses strictly on the business’s funnel side, while PayKickStart has a lifecycle approach to customers. Moving on, there is no point in comparing the price between these two products as it wouldn’t be fair to either of them. Instead, we recommend doing your homework, seeing what you need for your business, and choosing accordingly. 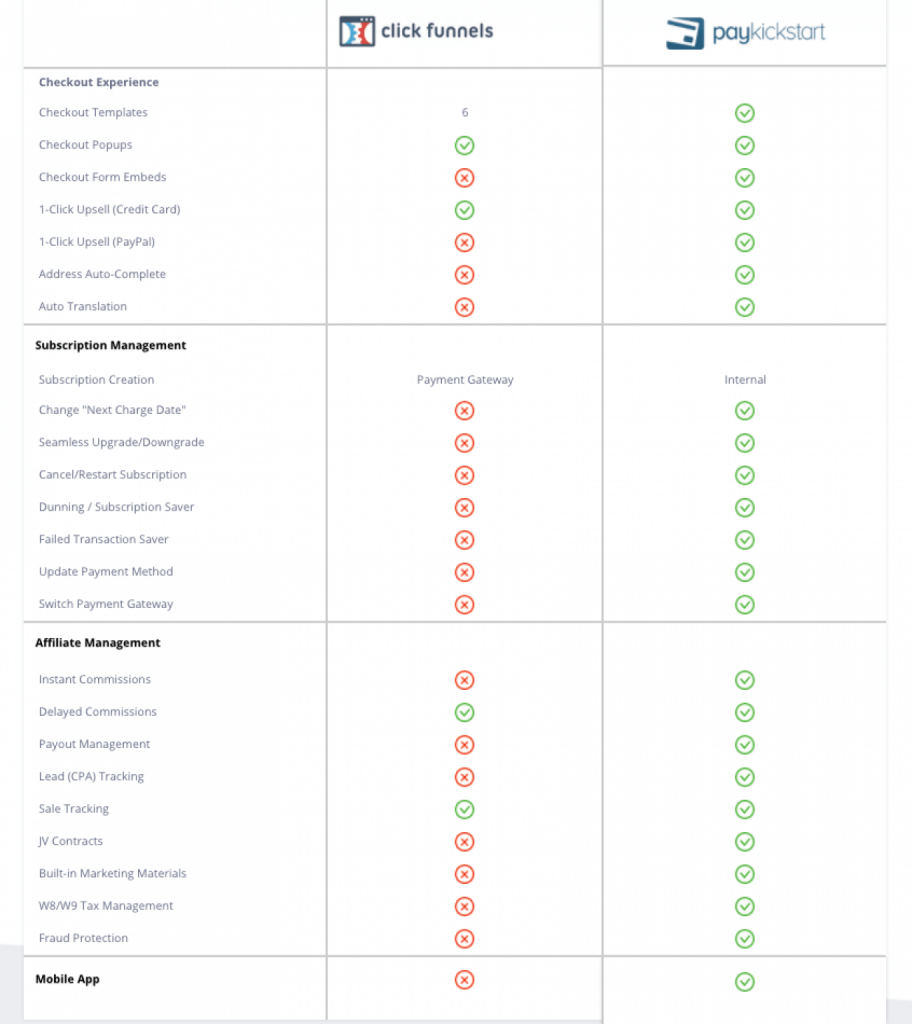 There isn’t much comparison to make between PayKickStart and Clickfunnels. We can only say that they are both great products and it wouldn’t be fair to compare them.

To sum up, in terms of the PayKickStart alternative, we would say that ThriveCart is by far the closest and most competitive one. While we admire UltraCart, we still think it has a long way to go till PayKickStart. Last, ClickFunnels is such a small part of what PayKickStart does: there is no point comparing the two of them.

We hope you enjoyed it! If you want to know more about PayKickStart features, integrations, and pricing, check out the Paykickstart review section.